Kamakura, Japan — December 1, 2017 — 16Lab, developer of OZON™ – a platform for next-generation computing experience – attended the Slush in Helsinki. It has relatively short history, but in just 10 years since its inception, it counted more than 20,000 participants from across the world. This year, the organizer arranged direct flights from the United States to Finland. During the event, 16Lab had many 1-on-1 meetings all day. All the meetings were productive, in particular, the one with the founder of a world-class company. The booth registration, event pass and other expenses were sponsored by the Ministry of Economy, Trade and Industry, METI – one of the ministries of the Japanese government. 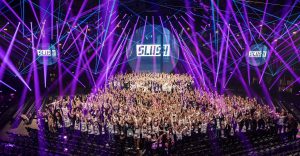